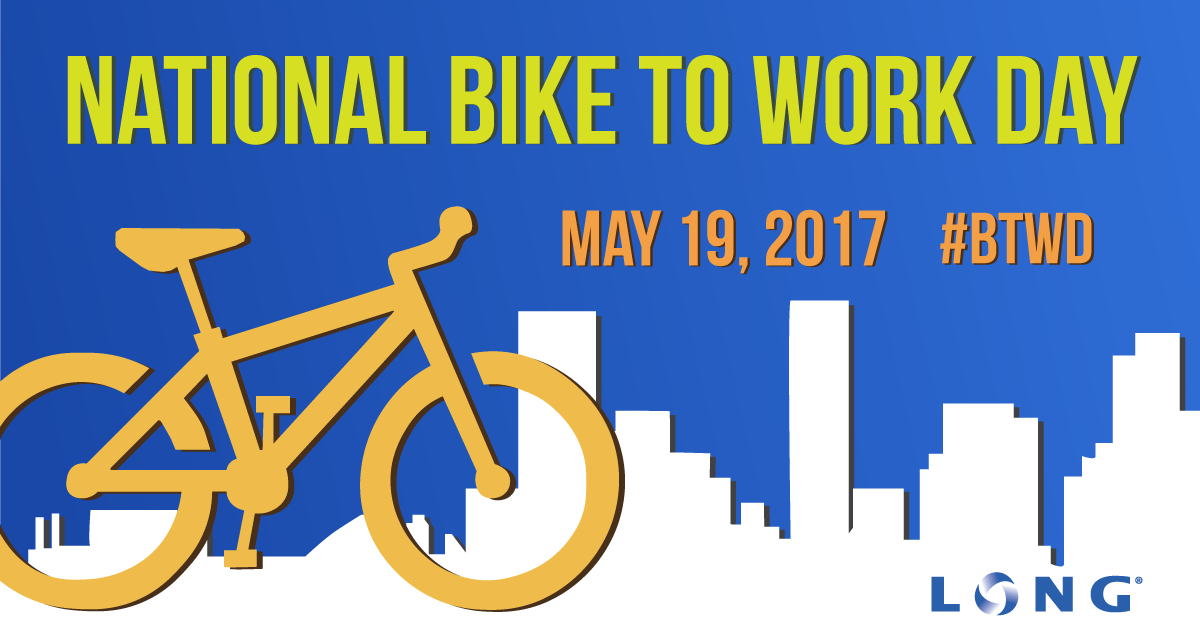 Did you know today is National Bike to Work Day? Bike to Work Day is an annual event designed to encourage people to exchange their cars for bikes for transportation, serving as a catalyst to reduce our footprint and improve air quality.

Here at LONG, we have several team members who enjoy bike commuting, including Tom , Ray and Richard Coleman. Below they share a little insight of their biking ways: 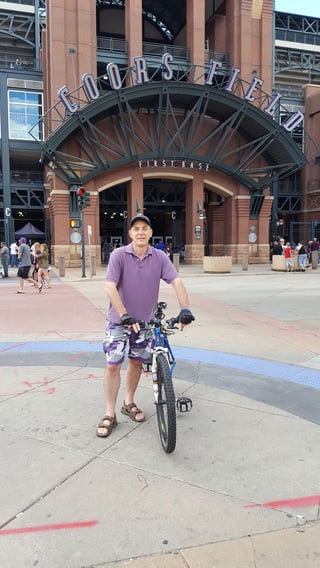 Tom is a Project Manager on the HVAC Equipment team. Tom has been into biking ever since he was a little kid, but didn’t start bike commuting until he attended college. He usually bikes to work once a week during the summer, which in Colorado is around May through September. Tom’s average commute to work is a 14-mile ride one way and can take anywhere between 45-60 minutes. For Tom, bike commuting is a lot calmer than driving. He states, “I enjoy seeing wildlife along the river instead of wild drivers along the highways”. His favorite ride outside of commuting to work is taking a ride downtown to Coors Field for the Colorado Rockies home games. You can see a picture of Tom and his bike next to the stadium to the right. Last, Tom has registered to participate in Denver’s Bike to Work Day, June 28th. If you are in the Denver area and would like to participate in the event as well, go to www.biketoworkday.us for more information.

Seattleite and LONG Security Solutions team member, Dan has biked to work as long as he can remember. "I have commuted by bike on and off for over 20 years and started riding to LONG last summer after buying my first new bike in many years," he recalls. Dan makes an effort to bike to work at least twice a week when the weather is nice, stating, "I do it for enjoyment, for exercise, and for the environmental value." In terms of benefits, Dan expressed that biking to work leaves him feeling energized and ready for the day ahead. He also pointed out that it's a great way to get in exercise without having to find additional time in the day to fit it in. Dan's love of biking is a family affair. He remembers starting out early enough to ride in a seat on the back of his mother's bicycle. Today, his kids share the same love and they frequently go on rides together on the weekends and during vacations. "We enjoy both road and trail biking," says Dan, "but my kids like it when there's a destination with a playground." 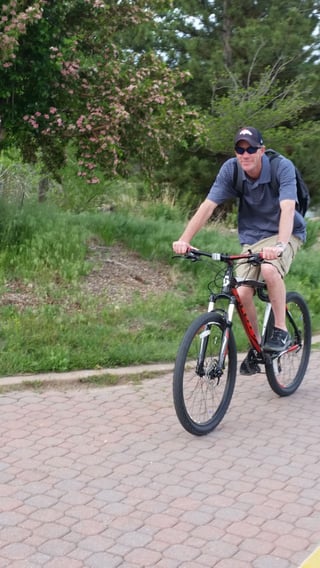 One of our fellow LONG PartsPros, Ray Gardner also enjoys Bike Commuting to the Littleton Office. He has enjoyed biking for as long has he can remember.  Ray can recall riding around the neighborhood as a kid, bike hikes, going down hills way too fast, and the occasional superman over the handlebars! He aims to bike to work as much as possible, the cardio gives a sense of refreshment to start the work day off well. Although his route is only a couple of miles, bike commuting also gives him a sense of adventure, sometimes on his commute home he will wander a bit and take a route he hasn’t tried before. According to Ray, biking is mainly enjoyable because... “I get the chance to take that route daily I can catch some of the subtle changes in the seasons and the environment.  It is a peaceful distraction.  This time of year is exciting because the morning lows are a bit warmer, the Platte river rises a bit day by day, everything is turning green.” Like Tom, Ray typically prefers to ride his mountain bike but would also enjoy riding a nice road bike occasionally, just to see how fast they can go!

LONG’s General Manager for Security Solutions, Richard Coleman, enjoys biking to work as well. He too has enjoyed biking since he was a but didn’t get serious about it until about 2 years ago. Unless Richard has places to get to quickly from the office, he strives to bike to work every day! Fortunately, Richard lives just over a mile from the Littleton office, so if he’s in a hurry he can bike to work on his Giant road bike in 6 minutes. When he isn’t in a hurry Richard likes to lengthen his ride to about 7 miles. Richard says he loves biking instead of driving to work, stating, “Probably the best part of it is . I tend to get my mind on all the things I have to do for the day and organize my thoughts differently. it’s the most rewarding part of it, riding the trail is much less chaotic than driving and really allows my mind to focus elsewhere.” His favorite ride, separate from bike commuting, is riding down to Chatfield Reservoir, CO and then heading north to Confluence Park, and back. It’s a round trip!

There are many benefits to bike commuting rather than driving to work. Those include: reducing your carbon footprint, saving money, avoiding traffic delays, and health benefits. Per Jill Harness from www.lifehack.org, people who bike to work typically:

While there are many benefits to Bike Commuting, per www.biketoworkday.us, it is recommended to implement the following safe practices each time you ride:

If you decide biking is a great idea for you, but you are new to the activity, www.biketoworkday.us would also like to stress these important tips before your first ride:

After all the refreshing information on biking to work, you are now ready to try to for yourself! Get out there and do something good for you and the earth! You won’t regret it. 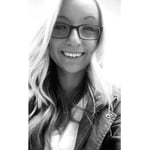 Meghan is the Marketing Specialist at LONG’s corporate headquarters in Littleton, CO. She loves to play ice hockey on the weekends and hike the Rocky Mountains with her Labrador, Easton.